A Letter From a Pet of Christmas Past

To all the young pets experiencing their first holiday season:

My name is Einstein, and I’ve seen 10 long holiday seasons, although my bloodhound nose tried its best to get me into trouble when I was a young pup. As I’m now a wise old hound, I figured young pups and kittens could learn from my mistakes and enjoy the holidays without an emergency veterinary visit.

It all started when I was a wee bag of wrinkles with oversized, floppy ears. My first Christmas was one heck of an adventure—I was losing my sharp puppy teeth, and needing to soothe my sore gums. I discovered new chew toys littering every corner of the house that, oddly, all had the same name: “Don’t chew that.”

One toy—the Christmas tree—captured my attention, because it was more spectacular than all the rest with its strings of lights, garlands of tinsel, and shiny balls, as well as salty snacks masquerading as decorations hanging on a big, low branch. The tree also had a dish underneath that was always full of  water, although it sometimes had a weird taste. Lots of boxes that were great fun to jump and climb on, with puffy bows to rip into, were gathered under the tree.

A word of advice here—stay well away from the Christmas tree. Although it looks like the most magical playground full of toys, it can be a death trap. Fortunately, I suffered from only a tiny electrical zap from chomping on the lights, and a cut paw from the glass balls that shattered when I batted them to the ground. Dr. Rivero at Caldwell Animal Hospital said I was a lucky pup and things could have been much worse. Did you know that chewing on an electrical cord can cause seizures? Or the tinsel could make me sick enough to turn up my nose at food and require emergency surgery? I definitely don’t want to miss out on any holiday goodies.

Speaking of holiday treats, Dr. Rivero warned my mom about many Christmas and New Year’s Eve offerings that could be hazardous, such as Christmas ham, chocolates, candy, desserts sweetened with xylitol, alcohol, and fruit and nut trays, and had to stay off my menu. These foods can cause pancreatitis, liver failure, kidney failure, heart problems, coma, or death, so I was stuck with my regular puppy treats.

After the Christmas commotion, I thought New Year’s Eve would be smooth sailing. But, since it was only one night of festivities rather than a few weeks, all the chaos was packed into one evening. I’ll admit, I have never been a fan of New Year’s Eve since my first one.

Around my normal bedtime, my home began to fill with people, many of whom I had never met, but who all had to squish my wrinkles, since I’m the cutest thing ever seen on four legs. As a pup, I usually loved basking in the adoration of my fans, but this was too much at once. The shrieking laughter, grabbing hands, and pounding music got to me, and I snarled at the next hand that reached out to pat me.

At this point, I was banished to the bedroom as punishment, without my cozy bed and new chew bone I had been given for Christmas. I couldn’t understand what I did wrong. I was only asking for space.

For the next couple of hours, I tried to get comfortable and ignore the hubbub of the party. As night turned into morning and strangers entered my dark prison to grab coats and purses, I saw my chance. I bolted clear out the front door and down the street.

As I was still a floppy puppy with a ton of growing to do, I tripped over my massive paws and face-planted on the sidewalk, and some party-goers were able to nab me and take me home before I could regain my feet and take off again. By then the party was dying down, and I was tuckered out, so I headed for my soft bed and was fast asleep in moments.

It took me some time to grow into my name, but with experience comes wisdom, and I’ve learned my lessons about holiday hazards for pets. Stick with pet-safe treats and toys, and stay away from any new decorations, foods, smells, or objects—they’re likely to be trouble. Heed the advice from a wise old hound, and you can earn the nickname “Einstein,” as well. 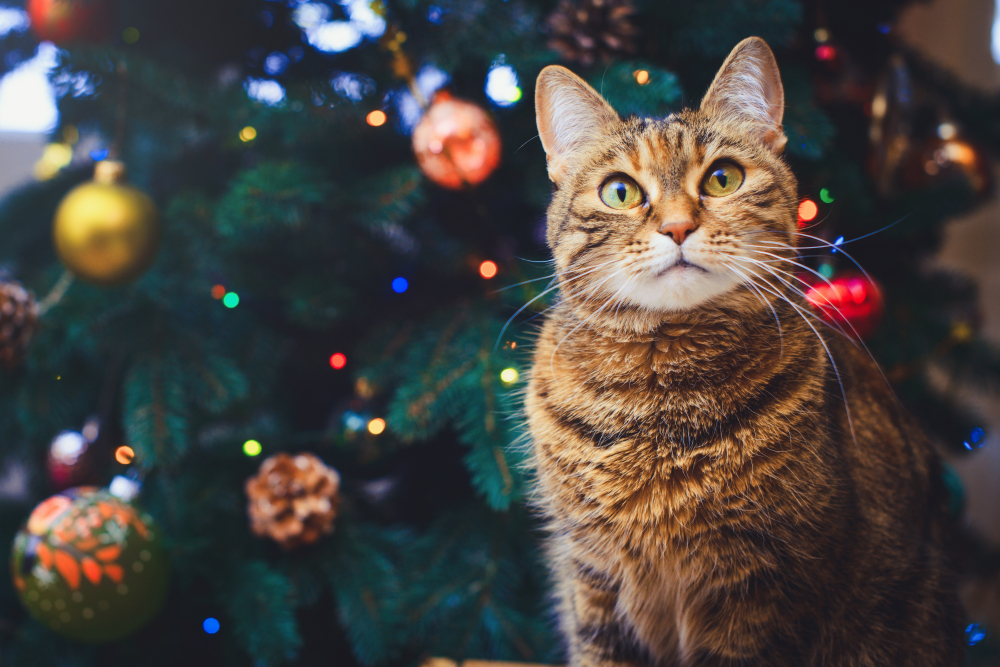 Poor Einstein had a rough start to his holiday festivities. As a puppy, he was naturally curious and stuck his nose into everything. We have a few tips to add to Einstein’s words of wisdom and keep your furry friend safe this holiday season:

Follow Einstein’s advice for a safe, happy holiday. But, if your pet hasn’t gained enough wisdom to stay out of mischief, give us a call.

About the Author: Caldwell Animal Hospital